GovLaw filed the Petition to remove the tent city encampment in the City of Duncan on April 10, 2017. On April 18, 2017, Mr. Justice Mackenzie granted the Order. For those keeping score, it took the Province of B.C. eight months to remove the tent city at the Victoria Courthouse in 2016. It took the City of Duncan eight days (yeah, we know – Duncan Rocks!). 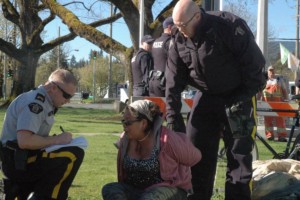 The furious urgency of Duncan’s civil injunction was the critical ingredient to its success. In the previous Victoria Courthouse decision, Chief Justice Hinkson demurred that it took many months for the Province to proceed to court, so the court did not see a sense of urgency. The Province’s interim injunction was denied, and they were forced to proceed with a second application months later.

Urgency is everything. The longer the tents remain, the less urgent it becomes for the courts to grant the injunction. Also, tent encampments expand with delays. In Duncan, what started out as three tents on March 31st quadrupled to twelve tents by April 18th. While temporary shelter was available for persons at the encampment, such shelter may not be available the larger the encampment becomes. Thus, the Mayor, Council and staff in Duncan moved fast and furiously to proceed with civil injunctive proceedings.

The eight days it took from the start of proceedings to an Order is now one of the fastest tent city turnarounds in the Province. The protesters of course, disobeyed the Order and were forcibly removed the next morning. The lesson here is that when dealing with tent cities, local governments need to move quickly!

Love Me “Tender”
Scroll to top